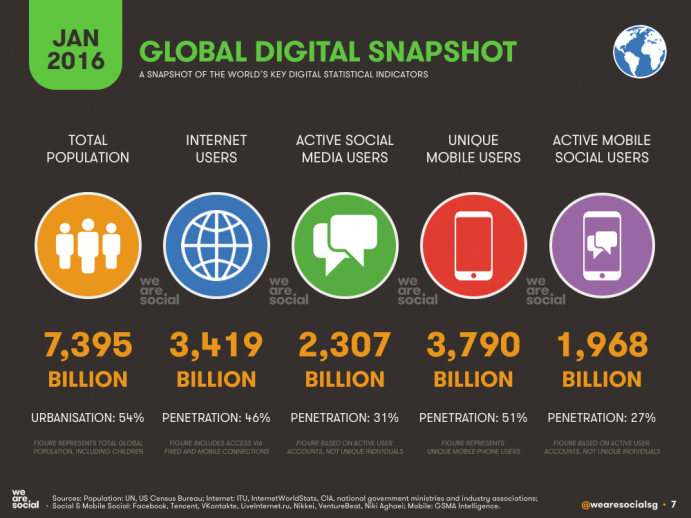 Every year, We Are Social produces a huge study into the behaviours and trends shaping the global digital landscape. We’ve just published our 2016 report – imaginatively entitled Digital in 2016 – which contains a wealth of global overviews, regional comparisons, and in-depth profiles of 30 of the world’s largest economies.

You can read the full report – all 500+ slides of it – in the SlideShare embed below, but if you’d prefer a quick digest of this year’s headlines and highlights, read on.

Digital in 2016 from We Are Social Singapore

The number of internet users around the world grew by 10% in the past year to surpass 3.4 billion users, or 46% of the world’s population. Social media use was also up 10%, whilst the number of people accessing social media via mobile devices shot up 17%. 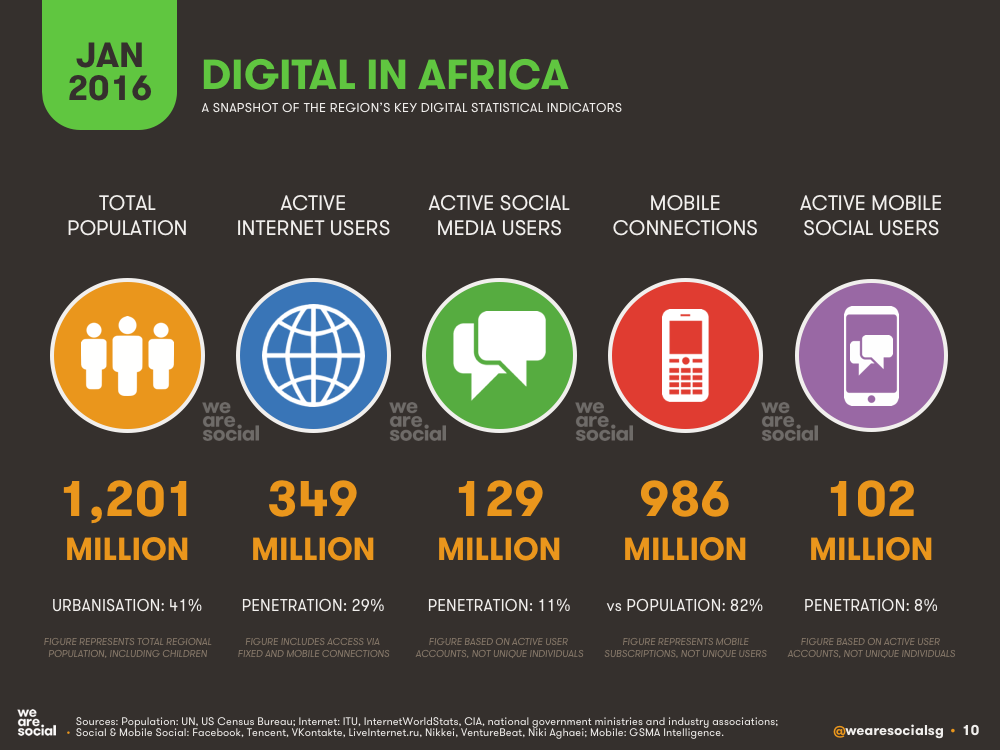 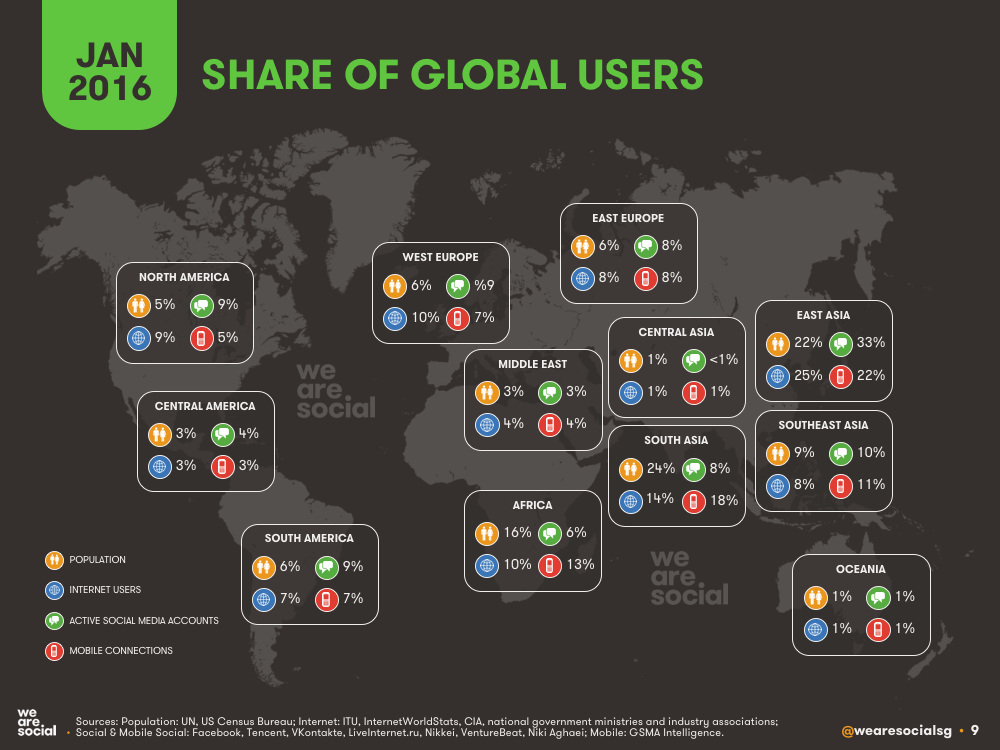 Internet Use Around The World

Internet use is not evenly distributed around the world, with many areas still struggling to connect. In particular, the populations of South-Asian countries such as India as still significantly under-represented when it comes to internet use. 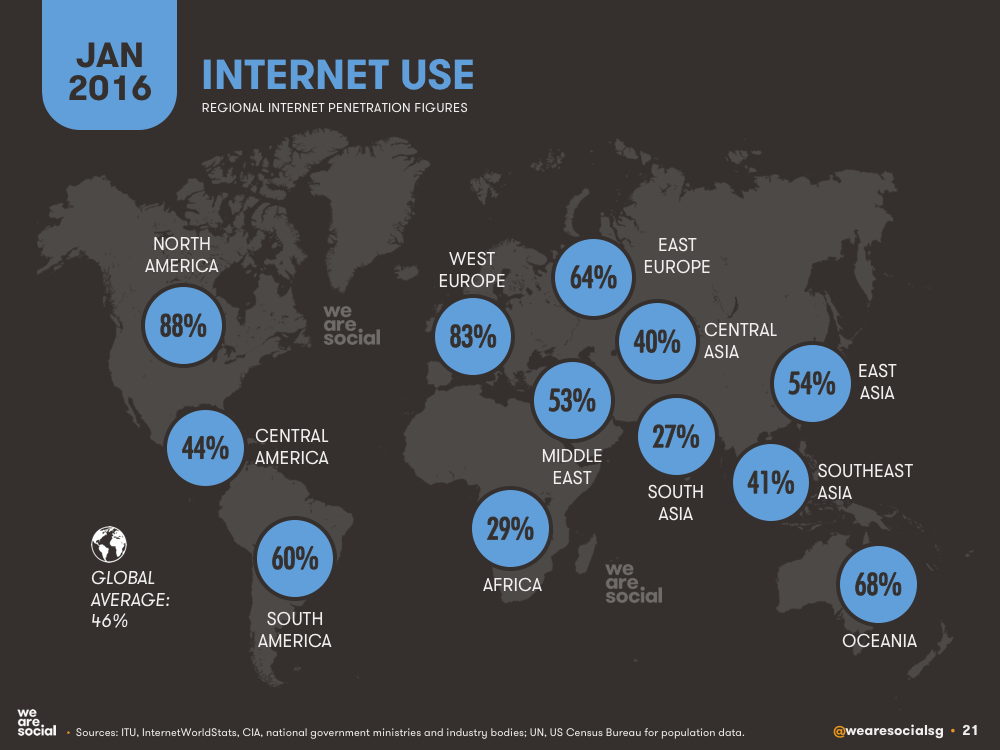 Our companion study to this year’s report, We Are Social’s 2016 Digital Yearbook, sets out headline digital data for 232 countries around the world, and this study reveals that many individual nations continue to struggle with single-digital internet penetration.

North Korea, Niger and Chad languish at the bottom of the ranking, in stark contrast to the high levels of internet access enjoyed by the populations of Western Europe. 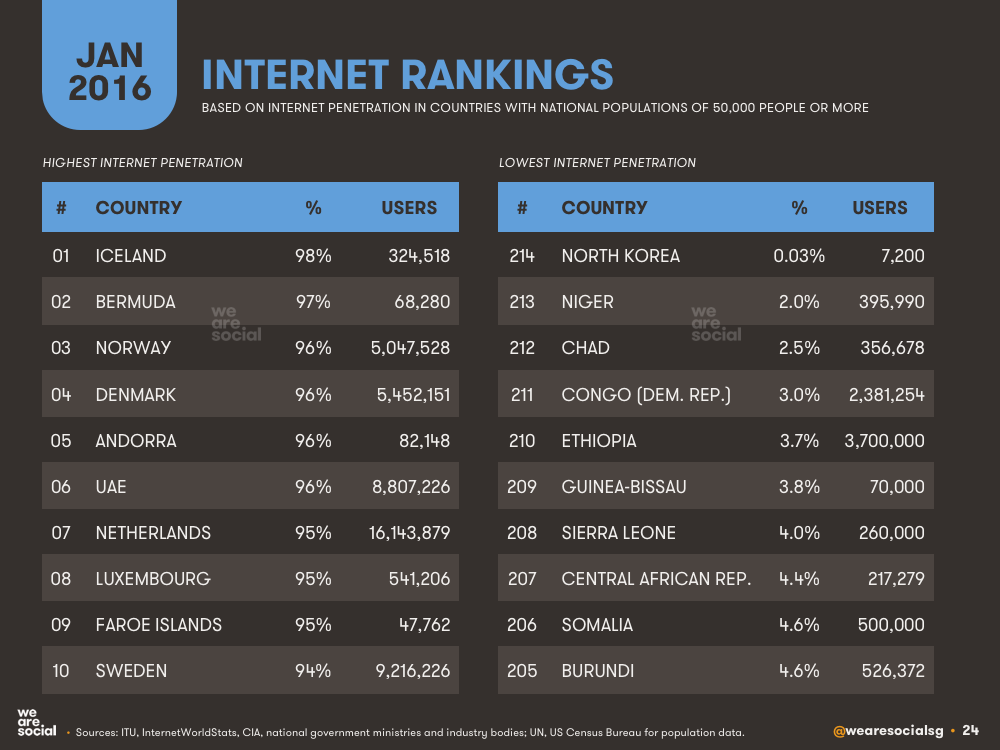 Internet use around the world is increasingly mobile, with mobile’s share of global web traffic up 21% year-on-year. Statistics within our Digital in 2016 report show that more than half of Facebook’s global users are now ‘mobile only’, and broader internet consumption in many parts of the world is now dominated by mobile. 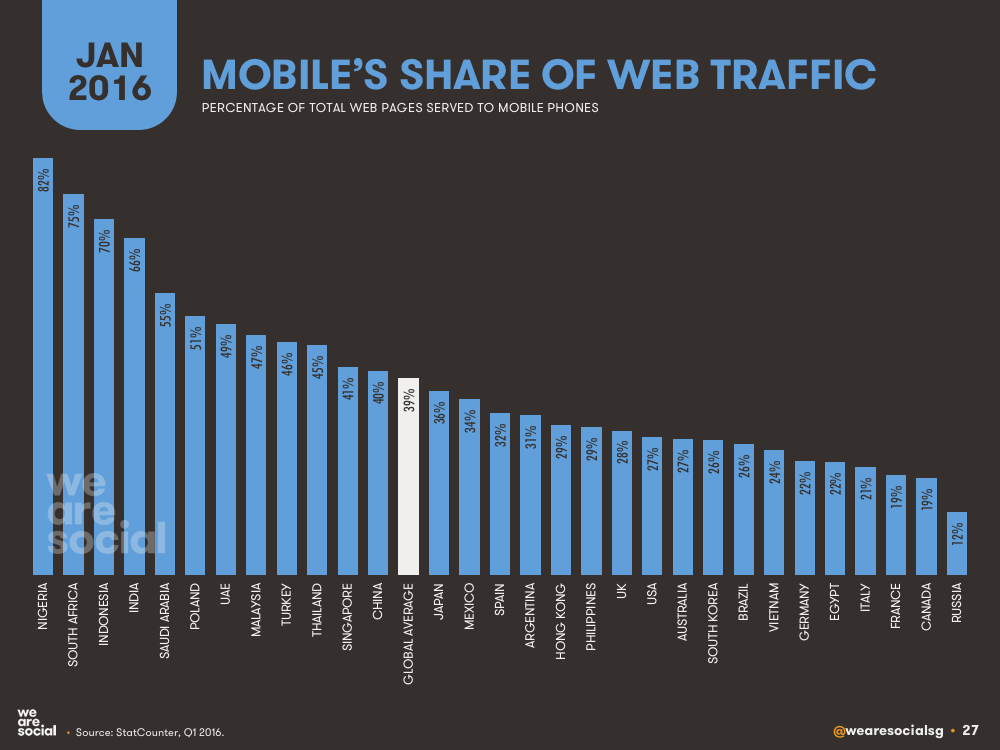 Social Media Use Around The World 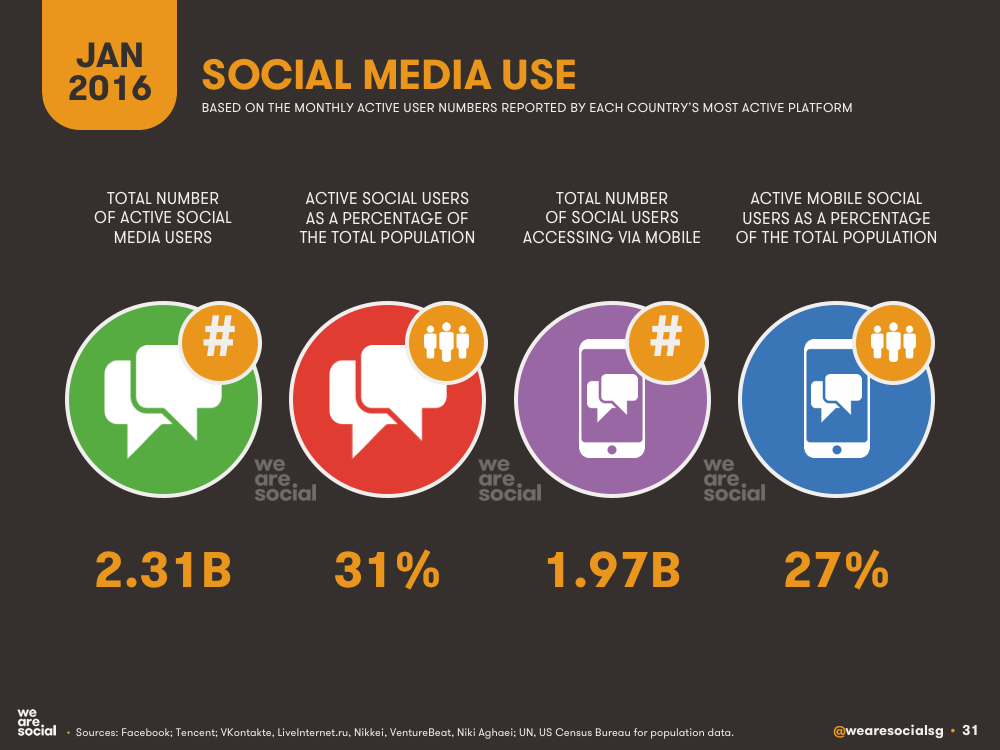 As with internet access though, social media use is not evenly spread across the globe, and most countries in Central Asia still register single-digit penetration. 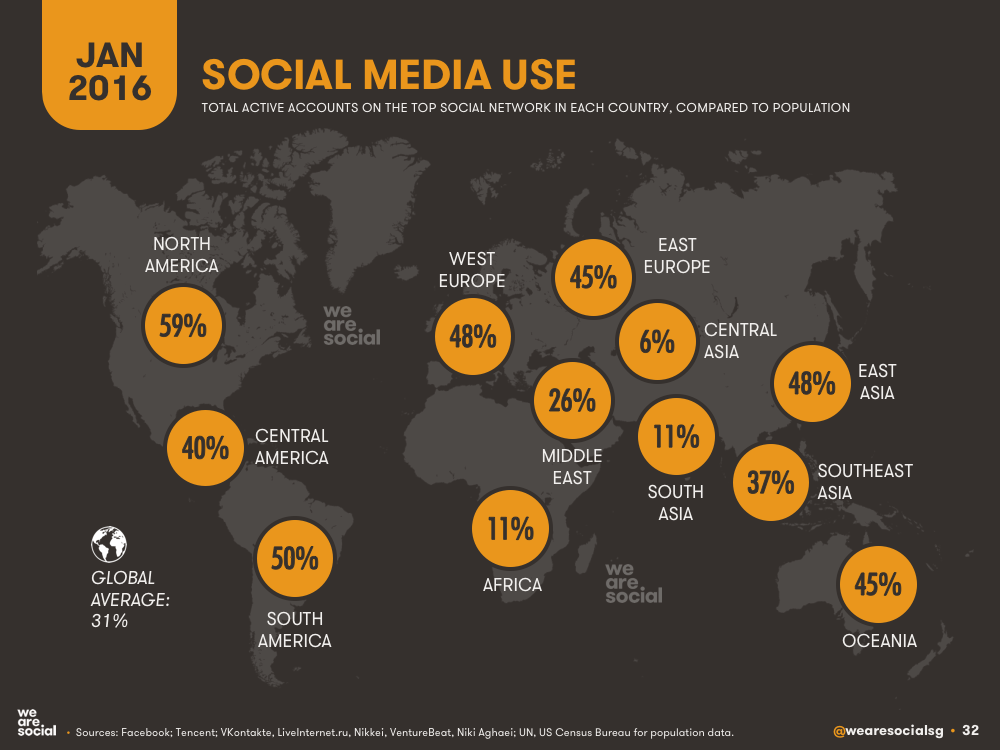 Facebook continues to dominate the global social media landscape, but China’s Tencent enjoys something of a monopoly in its domestic market, and that success is spreading to its Asian neighbours. However, with Facebook posting its quarterly results this week, Zuckerberg and team may manage to consolidate their lead once again. 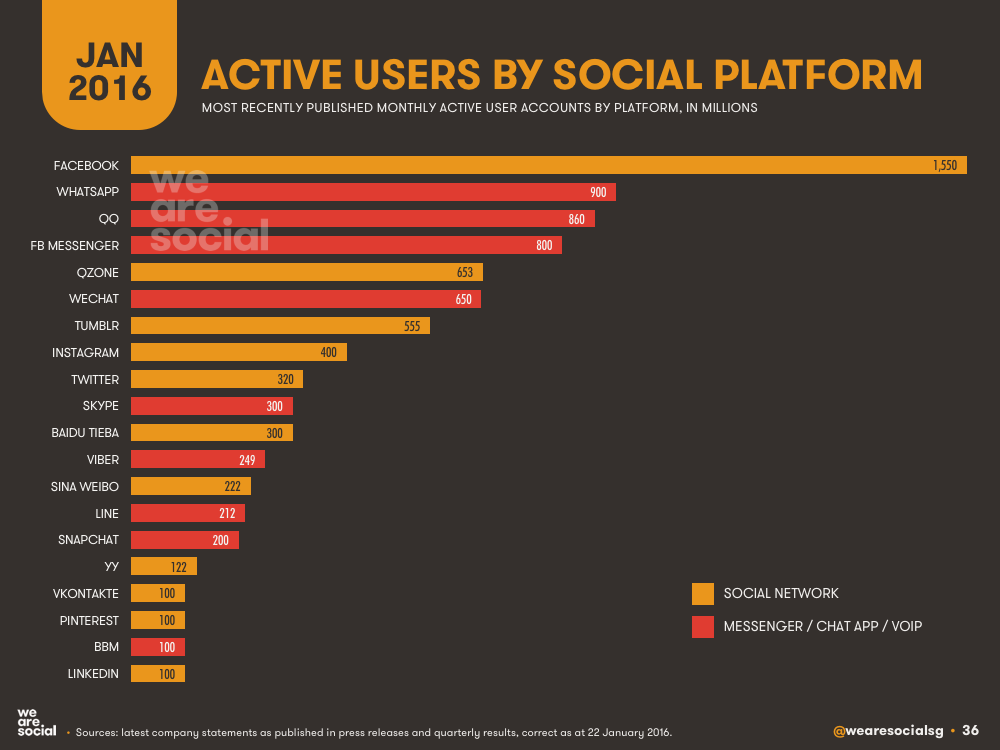 WhatsApp posted the most impressive growth of the top-ranked apps this year – up 50% to reach 900 million users – and we fully expect to see the world’s favourite chat app pass the 1 billion users milestone in the next few weeks.

Partly thanks to this strong growth in chat apps, mobile social media use is the stand-out story for us in this year’s report, and with the accelerating growth of mobile messengers, we believe that marketers will need to rethink their approach to social media in 2016 if they want to successfully engage their audiences.

We explore this shift in more detail in this year’s Executive Summary report, and offer our guidance and recommendations for marketers who want to make the most of this rising mobile social opportunity. You can also download the Executive Summary by clicking here.

Mobile Use Around The World

The number of unique mobile users grew 4% since this time last year, with more than half the world now owning a mobile phone. The growth in smartphone use around the world has been far more impressive though, with data from Ericsson suggesting that these powerful devices now account for 46% of all mobile handsets in use. 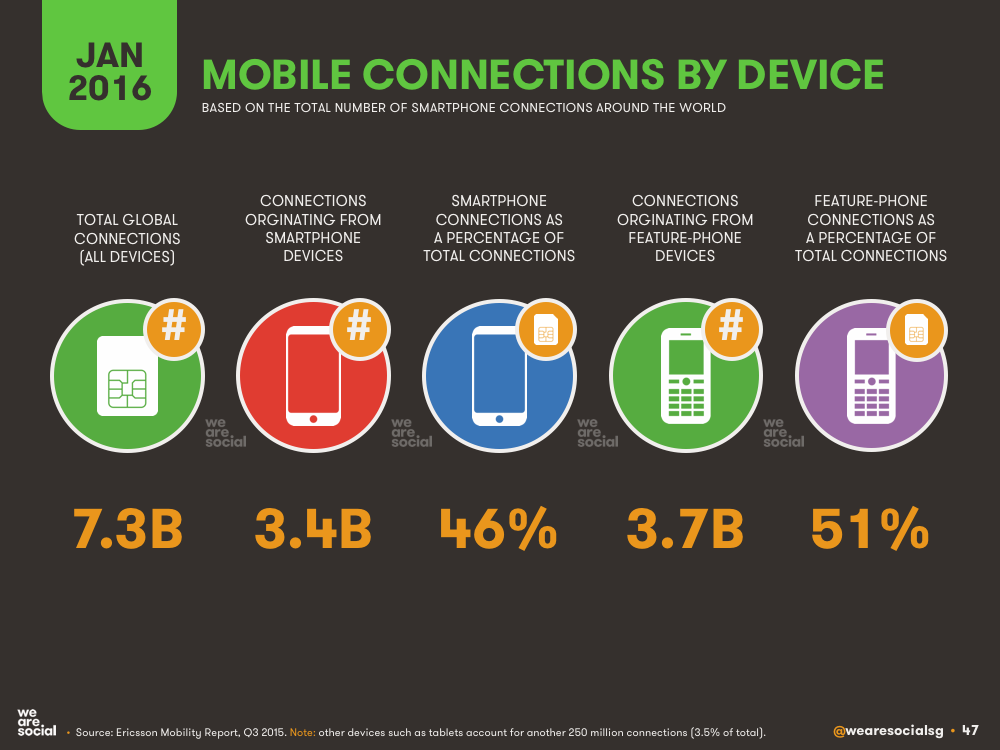 Mobile connectivity is improving as fast as handset technology too, with the number of people accessing mobile data services via broadband connections doubling in the past year, to reach 46 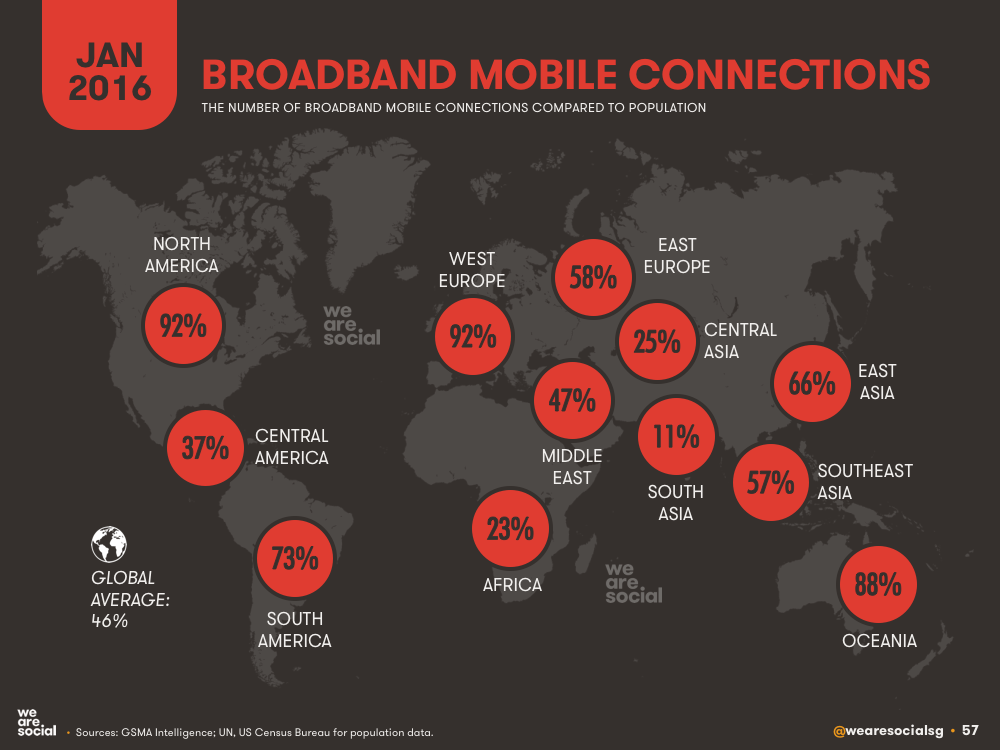 The range of activities that people perform on their mobiles is evolving in line with the adoption of these more powerful handsets and improved connections too; of particular interest to marketers will be the rapid growth in the use of mobile shopping around the world, with active m-commerce users surging 50% in the past 12 months. 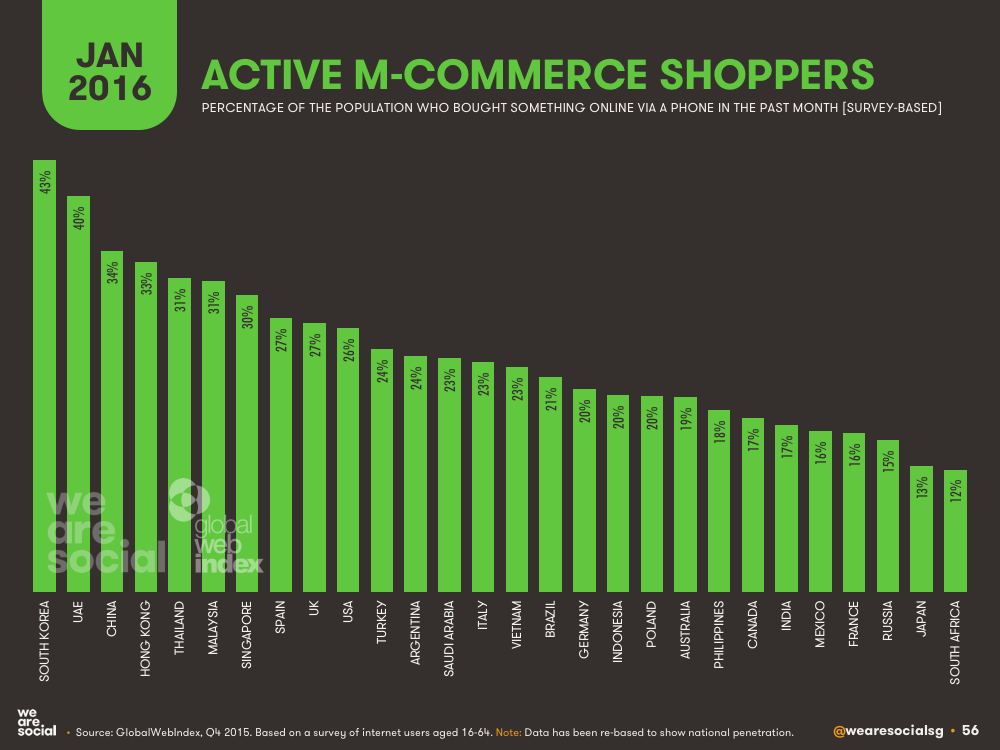 Of course, numbers on their own don’t mean very much, which is why events like next month’s Digital Marketing World Forum in Singapore are so important. If you’re already wondering how to make sense of all these numbers, or how you can take advantage of these trends to build value for your audiences and your organisation, you’ll definitely want to join us at the Mandarin Marina in Singapore on February 29th and March 1st – there’s still a handful of tickets left if you’re quick.

I’ll be chairing Day 2 of the conference, so do come and say hello. In the meantime, please feel free to connect with me on LinkedIn, or get in touch on Twitter – you’ll find me as @eskimon.

The post The World of Digital in 2016 appeared first on #DMWF Series Site.