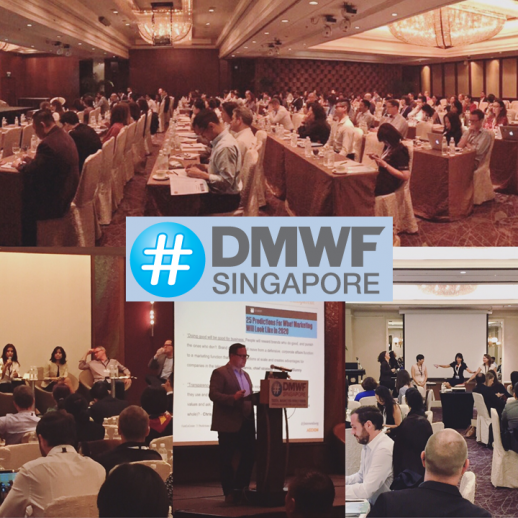 The first #DMWF of 2016 kicked off on 29th February at Marina Mandarin in Singapore with marketing professionals from across South East Asia, Australia and the rest of the world coming together to discuss the challenges that the digital future presents.

It was great to open the conference with our Chair, Rod Strother – VP Digital Transformation at Starhub.

Great turnout at #DMWF today and some excellent presenters so far. Advise marketers to get a hold of all the notes pic.twitter.com/EJcg6Jev4K

Joseph Toh, Head of Strategy and Innovation at Credit Suisse kicked off the talks to a fully engaged crowd with a keynote on surviving and thriving digital disruption, and discussing whether we now spend money on new technologies purely for the fear of missing out.

Some crazy stats from Joseph Toh to kick off #DMWF pic.twitter.com/XGFBPxiOla

And by 11.30 #DMWF was a trending hashtag in Singapore, so thank you all for that!

The final panel discussion of the day spoke about useful value exchange and how we are more willing to give personal details if we know the marketing we receive in return will be tailored and personalised to us – so no sending generic emails in 2016!

Day 2 was all about innovation with our labs on customer experience and crisis control, led by Elisabetta Aiello (Metro AG) and Simon Kemp (We Are Social). The Crisis Control groups came up with some pretty sturdy looking action plans for example crisis scenarios, ranging from an underage youth being hospitalised by your brand of alcohol, to a celebrity complaining about being served the wrong type of peanuts on a plane.

Some great presentations from the groups in the Crisis Control lab #DMWF #KatyPerry #peanuts #messagetotheworld pic.twitter.com/mXvbvsq96O

Wrapping up the conference we had Jim Rosenberg (Accion) speaking on leveraging causes and social good for content and partnerships. Apparently Taco Bell have said that “Transparency is the new black” when it comes to marketing. Jim was followed by Dominic Koh (MasterCard Asia) who got us all teary with some Priceless Surprises.

Dominic Koh shares Priceless Surprises & the importance of getting to your customers’ emotions #mastercard #DMWF pic.twitter.com/xkq6V3LT67

Thank you all for your participation, we look forward to seeing some of you at the next events across the #DMWF series in Amsterdam, London and New York and next time we return to Asia!

The post #DMWF Singapore Round Up appeared first on #DMWF Series Site.